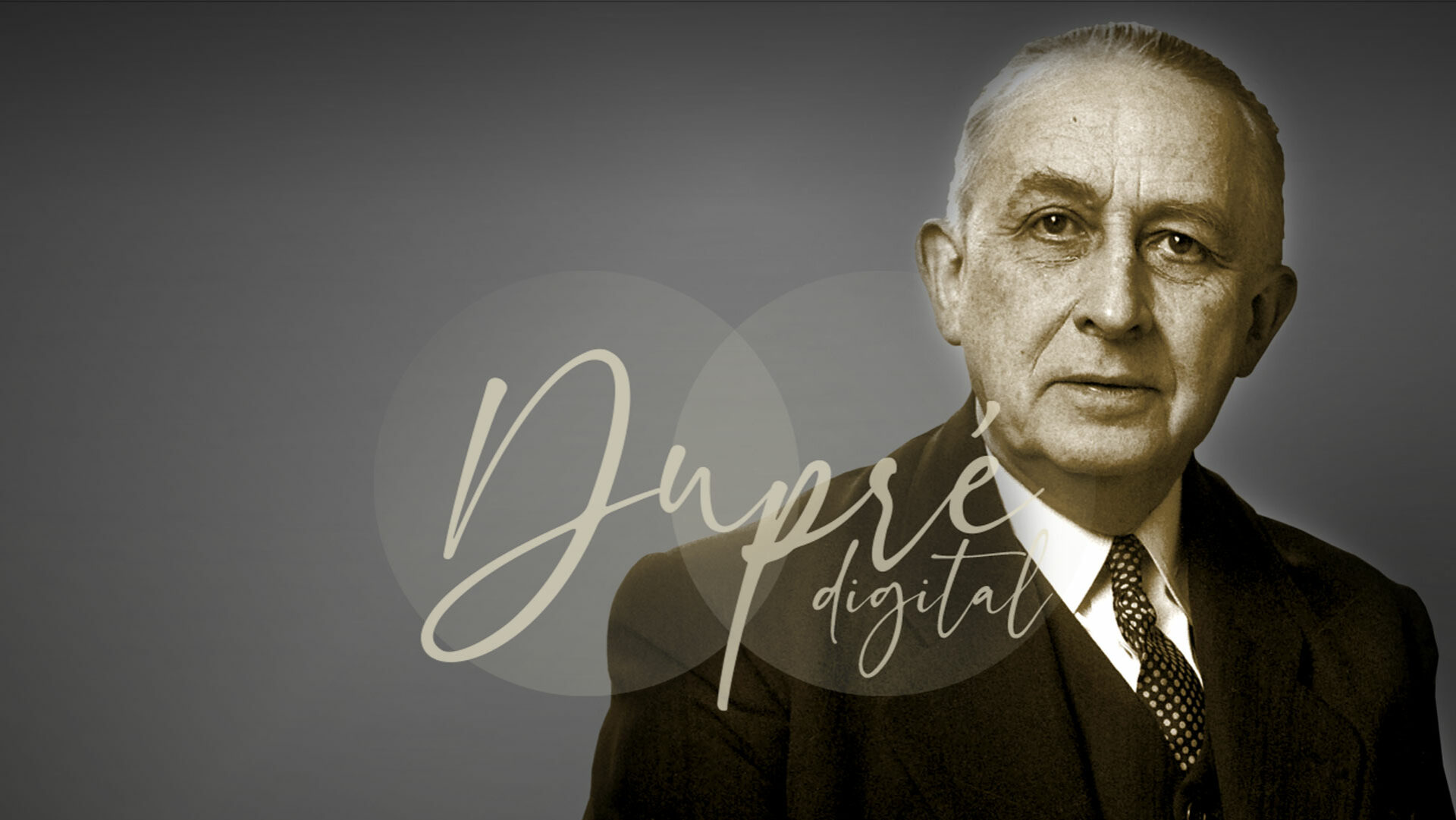 Marcel Dupré was born on 3 May 1886 in Rouen into an exceptionally musical environment. His father studied with Alexandre Guilmant and was organist at the Immaculée-Conception in Elbeuf and at Saint-Ouen in Rouen. His mother was a cellist and pianist and had the gift of an absolute pitch. Both of Marcel Dupré’s grandfathers were organists or choirmasters. His uncle Henri Dupré, a violinist, was an English professor who wrote his doctorate on the life of Henry Purcell.

In 1893 Marcel Dupré performed in public for the first time and was appointed titular organist of the Saint-Vivien church in Rouen in 1898.
He began composing at a young age and explored all genres of music: instrumental music, vocal music, piano music, chamber music. Among other works, he composed the cantata La Vision de Jacob in 1901.

In 1905 he won first prize in piano at the Paris Conservatoire in the class of Louis Diémer, and in 1906 Charles-Marie Widor appointed him his deputy at the great organ of Saint-Sulpice.

Further first prizes followed: in 1907 for organ in Alexandre Guilmant’s class, in 1909 for organ in Widor’s class.
It was also Charles-Marie Widor who persuaded him to apply for the Grand Prix de Rome, which he was to win in 1914 with his cantata Psyché.

Marcel Dupré had an extraordinary memory. Therefore, in 1920, he decided to perform the complete organ works of Johann Sebastian Bach from memory in ten concerts at the organ of the Paris Conservatoire. This was a world premiere. He repeated this feat in 1921 at the organ of the Palais du Trocadéros and later in Canada.

From 1916 to 1920, Louis Vierne stayed in Switzerland for treatment of his eyes. During this time Dupré substituted for him at the great organ of Notre-Dame de Paris.
This period also marked the beginning of Dupré’s international career: in 1920 he gave his England debut at the Royal Albert Hall in the presence of the royal family.
Thanks to the music director of the Wanamaker Store and on Widor’s advice, Marcel Dupré made his first tour of the United States and Canada in 1921. On this trip, he was hailed a “musical miracle” after improvising a symphony in 4 movements on given themes. Throughout his musical life, whether as an organist in the liturgy or in concert, Dupré improvised passionately in all musical forms, perhaps counting the fugue as his favorite (at a concert he improvised a triple fugue, among others).

In 1926 Marcel Dupré succeeded Eugène Gigout as professor of the organ class at the Paris Conservatoire. He trained many famous organists such as Jeanne Demessieux, Rolande Falcinelli, Marie-Madeleine Duruflé, Pierre Cochereau, Olivier Messiaen, Jehan Alain, Jean Guillou to name but a few of his students.
In addition to teaching at the Paris Conservatoire, Dupré also taught at the École Normale de Musique de Paris and at the American Conservatory in Fontainebleau.
When Widor gave up the post of organist at Saint-Sulpice at the end of 1933, Dupré succeeded him on 1 January 1934 at Widor’s request.

In 1939 Marcel Dupré toured Australia and continued his tour in the United States. He remained in France during World War II.
After the war ended in 1945, Dupré performed the complete organ works of Bach at Saint-Philippe du Roule in Paris again.

In 1948 Marcel Dupré made his tenth concert tour to the United States. In 1954 he gave up his organ class and was appointed director of the Paris Conservatoire. During this time, he carried out a number of reforms, such as the establishment of a harpsichord class.

In 1956 he was elected a member of the Académie des Beaux-Arts de l’institut de France.
He died in Meudon on Whit Sunday, 30 May 1971, having played at Saint-Sulpice that very morning.
During his lifetime, Marcel Dupré received several honors: